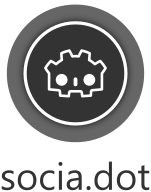 socia.dot is a minimalistic open frontend, social network clone (like Instagram, Facebook, Twitter) completely developed with Godot in GDScript, built on top of the GodotFirebase addon as a backend interface for Firebase. This is just a Demo to give a general overview about all the features provided by GodotFirebase (Authentication, Firestore, Realtime Database, Storage).

As a co-developer to the GodotFirebase plugin for Godot Engine, which brings all of the main features provided by Firebase to Godot, I wanted to develop some minimalistic project as a showcase for all of these features we are able to integrate.

Even though Godot is mainly a game engine, the ease with which you can easily create graphical interfaces and interactive components has always pushed me to work on projects that were much more focused on user experience than on video game interaction (which to me are exactly the same).

I think this is one of my most ambitious projects as well as the one I care the most about, because in this small project developed in a few days and only for demonstration purposes I collected many of my interests, many ad hoc solutions never seen before in such an application, and probably for the first time a real concept of open cross-platform social network through a game engine, based on a backend like Firebase.

I was very very happy seeing the reaction both under my facebook post and tweet about this. Honestly when I shared that the demo was open source and available for everyone with a live demo I didn't expect so much resonance that people even started to join the social itself and contact me.

Of course anything of this would have been possible without my amazing international collaborators at @GodotNuts. Thank you very much!